I Can Has Leadership!

None
Wonder if an ECMO could get in on this...

I don't know much about anything... but those numbers just seem questionable for such a high density altitude, single engine deal.

ryan1234 said:
I don't know much about anything... but those numbers just seem questionable for such a high density altitude, single engine deal.
Click to expand...

Pugs said:
Is the owner a company? Just curious if that is a temp buno on the fuselage.
Click to expand...

PerDiem said:
The article says the buno is fake and is borrowed from a MH-53
Click to expand...

It was orginally purchased by EP Aviation and operated/maintained by Presidential Airways under lease to Navy beginning in May of 2008. The lease expired on 30 June at which time it was flown from Pax to Elizabeth City in orginal state received except for a few holes here and there for equipment installs.

As to mystery of the BUNO....now the story can be told....it was nothing nefarious or related to classification of certain aspects of the demo. The BUNO number it flew with was the one received from the Class Desk at AIRLANT when we were chomping at the bit to get to Fallon and get started working with JTACs. Importantly, it was also the BUNO tied to our AirCard. Nobody knew anything was amiss until sharp so-called "tailspotters" saw it enroute and some time later, chatter about the N number and suspicious BUNO popped up on forums. We checked and sure enough, it was a MH-53. In fact, one I was familiar with from being the duty MH-53 at CSS Panama City. Once the error was discovered, we actually wanted to change it to reflect the accurate BUNO (one digit was off) and it would be as easy as a trip to the sign store for the aircraft, but it seems once the AirCard was cut and our funding line established at Fallon, it was way too hard for ALCON to change the AirCard. SO it stayed and we chuckled everytime someone popped up decrying the mysterious BUNO.

FAC (A) responsibilities + having to manage 4 radios + Link 16/SADL + FLIR + FalconView and other SOF specific SW/HW? Those who know the systems asked how we did with 2 aircrew.

I don't know much about anything... but those numbers just seem questionable for such a high density altitude, single engine deal.
Click to expand...

Well, the folks flying it were happy and ready to go in harm's way...and you're right, you don't know much about the Super T as its base weight is under 7K and even with FAMMO + full bag + drops, it isn't 12K

heyjoe said:
FAC (A) responsibilities + having to manage 4 radios + Link 16/SADL + FLIR + FalconView and other SOF specific SW/HW? Those who know the systems asked how we did with 2 aircrew.

Well, the folks flying it were happy and ready to go in harm's way...and you're right, you don't know much about the Super T as its base weight is under 7K and even with FAMMO + full bag + drops, it isn't 12K
Click to expand...

The objective (particularly for IF) isn't to carry everything but the kitchen sink, it's persistence during the Find and Fix phase. If you need a lot of iron fora kinetic conclusion, Super T has adequate stores available and either Link 16 or SADL can summon plenty of traditional CAS assets if needed. The point that gets missed is IF wasn't a CAS demo at all so using traditional CAS metrics is like the proverbial apples and oranges. Pesistence and low probability of detection (fast movers are too loud) ae what leads the solution to a turboprop that can operate from remote FOB setups and only require a single maintainer for care and feeding.

Imminent Fury; not your father's or brother's or sister's CAS/Light Strike solution 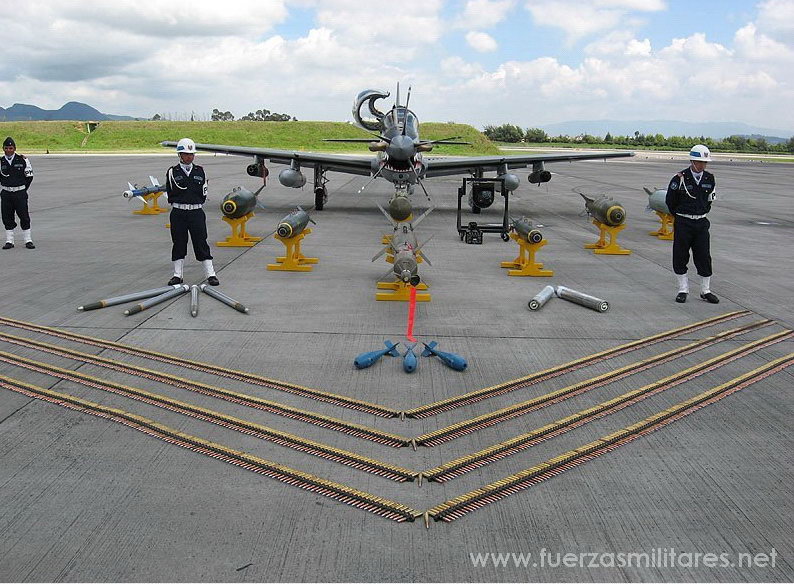 pilot
None
Super Moderator
Contributor
You mean to fly it you're going to have to wear SPATS? Really?

nittany03 said:
You mean to fly it you're going to have to wear SPATS? Really?

Your squadron deoesn't have them yet?

heyjoe said:
...(request to deploy 4 Super Ts was turned down by Congress despite request from theatre)...
Click to expand...

Why does it not surprise me that the Kansas CODEL is behind this?

pilot
Contributor
Very cool stuff. I'm surprised to see they're allowed to be this open about it.

heyjoe said:
Publicity photos like this one give false impression goal is to load up everything but the kitchen sink


My favorite part is all the live ordnance surrounding the Mk 76/BDU-33!!

Yeah, I imagine someone getting hit on the head and going "ouch, that really, really hurt"

First off: cool plane that looks like it could deliver the goods that the warfighters need.


But I've got one question. So the Navy asked for 22 million dollars to fund a ready-to-go, proven and cheap air platform that could serve a critical role. This after a number of individuals with stars on their shoulders said we needed, yet Congress turned the request down? What's the rationale for this?!?! Or am I incorrect in my assumptions? What I'm getting is that Congress denied the warfighter a critical tool....seems kinda AFU to me....
G

None
Well, to come up with the conclusion that it's AFU, you'd have to believe that senior military brass, congress, or the executive branch cared at all about doing the right thing and getting the best tool for the job to the guys on the front lines. Nothing could be further from the truth. The military brass cares about pleasing defense contractors so they can make some money when they retire. Congress wants contracts, jobs, and money flowing into their districts, and into their pockets, thus Kansas' congressional delegation will ensure this never happens when contracts could go to Hawker Beechcraft instead. The executive branch cares about having the votes in congress and the dollars in their pockets for the next election. The sole purpose of the Soldier, Sailor, Airman, or Marine on the front lines or deployed is to provide a justification for the manufacturers to produce goods, make a profit, channel that money into politicians' pockets, and turn that money into jobs for their districts and soon to retire military brass. Military deaths are only opportunities for those who have never served, will never serve, and will never have children who serve to profit handsomely as they sell the military products. Nobody cares about the guys doing the fighting that the guys next to them doing the fighting. Sad but true.
You must log in or register to reply here.
Share:
Facebook Twitter Reddit Pinterest Tumblr WhatsApp Email Share Link
Top