pilot
Super Moderator
I'm a huge fan of Omega's...the equal of any Swiss watches, are super rugged and not overpriced like a Rolex (and I like Rolex; I'll probably get a Sea Dweller one day, but I know the brand is about 70% hype). I have an Omega X-33 and like it a lot; it has the functions that I need (4 timezones are easily displayed, though I really just use it for Zulu, homeplate and where ever I'm hanging my hat), it has an 82 decibel alarm, and a handy backlight to use in the plane. It has everything you need and having an engraved caseback is a cool memento of your time flying.

That being said, you have two great choices. The Speedmaster Professional is the iconic Moonwatch, worn by countless steely-eyed astronauts and still the only watch approved by NASA for EVA. When I think of a chronograph (a watch with a stopwatch function...on that watch the seconds hand is in the register at 9 o'clock), that is the watch I think of.

Plusses? It is easily read in low light, it keeps near COSC specs in its time keeping, and it is celebrating its 50 year anniversary this year. The minuses? The crystal is Hesalite (a type of plastic) and scratches (this can be buffed out by products like Polywatch...google it), you have to manually wind it, low water resistance (careful swimming, and no diving)and it has no date function. Because of this I wouldn't want it as a primary watch. Still, it is a great watch with a storied history.

Your Seamaster GMT is a great watch, especially with the GMT function (that is, the red hand on it will point to a second timezone and make a revolution around the clockface once every 24 hours). It is very similar to the watches worn by James Bond in the movies since Goldeneye, with some changes to it. Different movement, applied indeces, GMT function. Because of these changes it is very expensive; the Co-axial movement (a relatively new movement, proprietary to Omega that is supposed to improve accuracy and length of time between servicing) usually boosts the price of the watch 1000 bucks. If dad doesn't mind, go for it; still it is pricey when you could probably find the watch it was originally based on (the 2531.80.00, w/out GMT function) for a lot less, as they were discontinued this year, but a lot of dealers still have them. Or you could get the 2220.80.00 (it is the watch used in the current Bond film; an update of the 2531.80.00) and save some dough as well, though it does have the co-axial movement like the GMT.
Plusses: Scratch-proof sapphire crystal, great water resistance (you could dive with it), the movement is one of the most significant horological advances in the last 50 years, and the second timezone is helpful to pilots. Minuses: Movement is more expensive than comparable watches, it doesn't have the GMT markers on the bezel, i.e., you couldn't move the bezel and track a third timezone.

I would probably get the Seamaster of your two choices; better water resistance, scratch resistance, and the date feature make it more versatile.

pilot
Contributor
My winging present to myself watch. 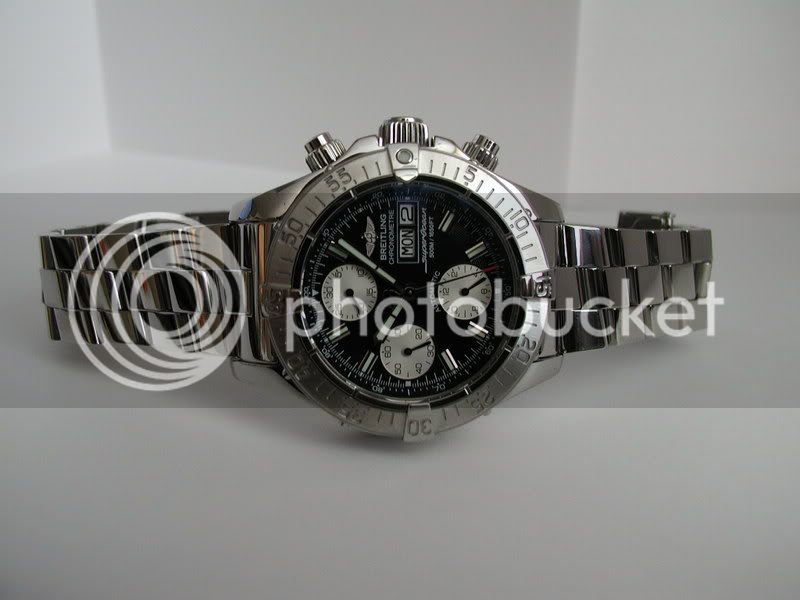 Its certainly a possibility that a Rolex may appear on my wrist in a year or two.

I'd love to get an X-33 but as yet I haven't been able to find enough non cheapskate P-3 drivers to make it happen. Too many damn wives and kids sucking up disposable income:icon_rage

pilot
Contributor
Thanks for all the input everybody and especially for the break down hercdriver.

I went around yesterday and tried on some different omegas and I really liked the Seamaster 300m so I figure I would like the 300m GMT. The GMT function is something I really would like to have and I sure it would be helpful. So far I haven't found a store that has the Speedmaster Professional in stock to I can try it on... My wrists are fairly small so it might be too big of a watch for me...

This watch is not going to be an everyday watch because I already have a nice Citizen Eco-Drive (quartz) that can get banged up.

I am leaning toward the Speedmaster Professional right now mainly because the looks of it. There are just too many nice watches out there...

It's gettin' a bit dramatic 'round here...

pilot
Contributor
i'd go with one of these....
View attachment swatch.bmp

pilot
Contributor
or these.....

heynowlookout said:
My winging present to myself watch.

Its certainly a possibility that a Rolex may appear on my wrist in a year or two.

I'd love to get an X-33 but as yet I haven't been able to find enough non cheapskate P-3 drivers to make it happen. Too many damn wives and kids sucking up disposable income:icon_rage
Click to expand...

My Dad got me the same when I finished OCS... Breitling here.
V

I would go for the Omega Speedmaster, it just looks great.
Steve

pilot
Contributor
Well after trying on countless watchess I have decided on the Speedmaster Professional.

For what I am going to use the watch for it is the best fit. I also was very surprised at how thin the watch was compared to most of the others I tried on.

Should be ordering it when my dad gets back from Tel Aviv early next week!

Thanks for the help and the opinions. Much appreciated!

pilot
None
Man when I graduated college I got a card with a congrats on it. Spoiled bitches!

It's gettin' a bit dramatic 'round here...

None
Super Moderator
Contributor
I got dinner at a seafood restaurant.

pilot
Contributor
I had been working on this watch for years!

Plus, having the military pay for school was a good selling point:icon_wink

pilot
Super Moderator
You might want to order it through AAFES; they are an authorized dealer (which is a big deal with warranty...lots of places on the internets are grey market dealers who file the serial numbers off voiding the warranty). I also can get you the name of an authorized dealer on the internet who is supposed to get Omegas at a good deal (most dealers will offer around 15% off MSRP); PM me if interested.
You must log in or register to reply here.
Share:
Facebook Twitter Google+ Reddit Pinterest Tumblr WhatsApp Email Link
Top