Ship Photo of the Day

The main question is what disabled the steering gear of Hiei - either 8" AP shell from USS CA-38 San Francisco, or Mk15 torpedo from DD-445 Fletcher (a salvo fired at about 02:05 that night). Hope new found wreck would be able to shed the light.

pilot
Site Admin
Contributor
That last picture is pretty impressive for the time. "Real-time" imagery of ordnance impact, at altitude.

pilot
Since we are discussing that particular battle I'll introduce the USS Cassin Young (maybe already mentioned here) named after the commanding officer of the USS San Francisco, Captain Cassin Young who was awarded the Medal of Honor for his actions at Pearl Harbor on December 7, 1941. Captain Young had only been in command of the USS San Francisco for five days before the battle.

A Fletcher Class DD, she saw extensive service in the PTO and was hit twice by Kamikaze's.

After the war she was modified extensively and served during Korea and was a stout cold warrior until 1960 when she went into storage.

She was struck in 1974 and sent over to the US National Park Service to hold station at Boston National Historical Park, specifically the Charlestown Navy Yard (although she was built on the west coast). Back in my Park Ranger days I worked many a day on the Cassin Young and she was loved by all visitors. Back in 2012 the NPS considered scrapping her, but the outcry was too great. You can still go onboard today and if you want a deeper look at some areas typically closed to the public PM me, I still have a few friends there.

Where do you get most of your information from Randy?
Click to expand...

Tend to watch youtube videos of historical battles and then take an interest in certain ships. Internet search generally starts with the Navy's Historical website http://www.navsource.org/ also http://www.navweaps.com/ and finally wikipedia. Often there is a lot of historical information that gets forgotten over time. An example would be the North Carolina class battleships that I referenced earlier and am looking at again. Trying to figure out where the determination was to go smaller with the secondary battery (5"/38 cal) when most contemporary battleships were using 6" secondaries. Brilliant move as it allowed much better AA defense. Lot of guys here are really good with the historical stuff- sometimes if you can't find something the audience can dig it out. Couple of other interesting areas are how some ships were able to adapt over time such as escort carriers becoming a stepping stone to helicopter carriers as well as specialized ships such as the anti-aircraft Atlanta class cruisers.

Speaking of the Atlanta (CL-51), it was the lead ship of a light cruiser class that had no 6" cannons, but rather a tremendous amount of anti-aircraft firepower in its 16 (8x2) 5"/38 cal dual purpose guns.

The light cruiser USS Atlanta (CL 51), foreground, and the Heavy Cruiser USS Vincennes (CA 44) maneuver near the aircraft carrier USS Hornet (CV 8) during the Battle of Midway. A wartime photo censor has removed the radar antenna from the Atlanta's foremast. Also, Atlanta was the only US Light Cruiser to participate in the battle. 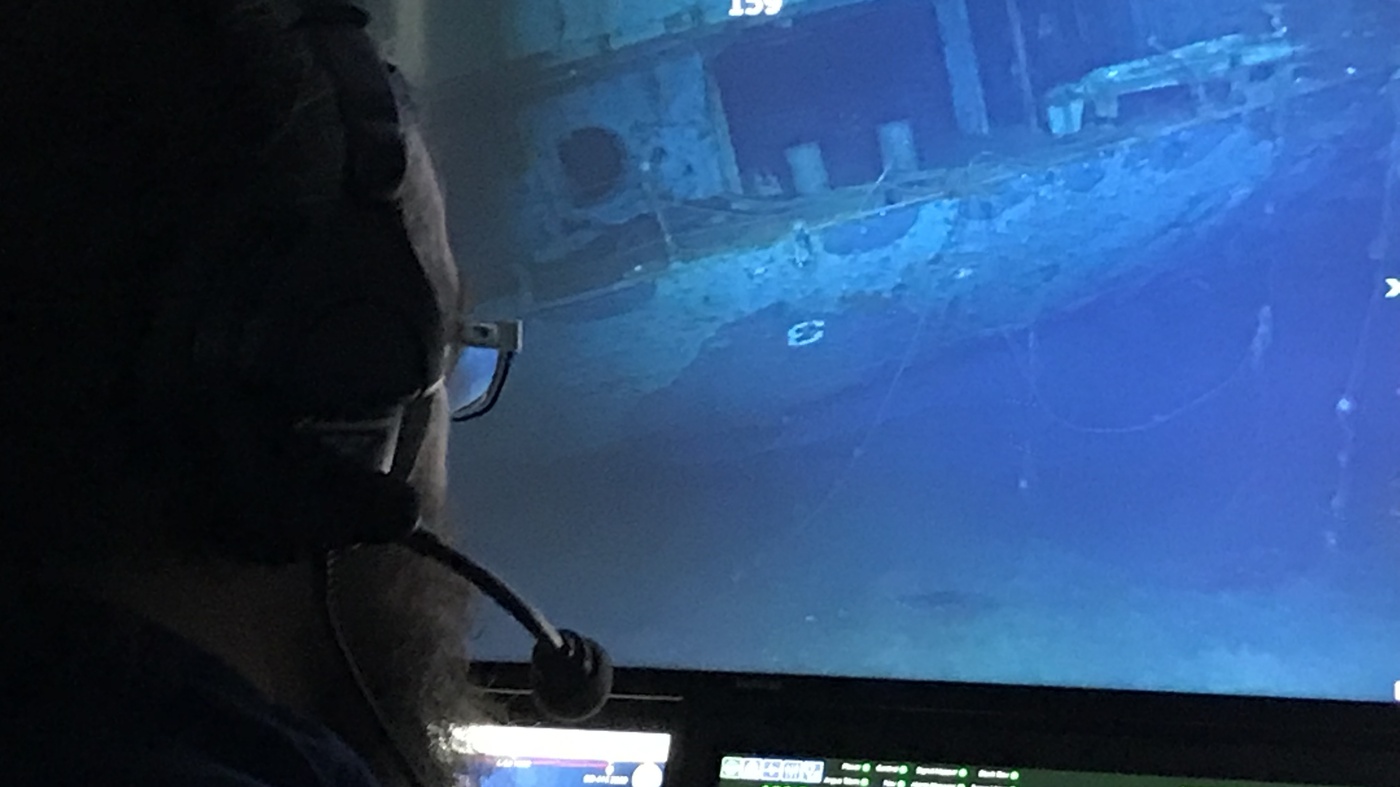 The Hornet played a role in several key events in the war – including the Doolittle Raid on Japan and the Battle of Midway. Researchers have located it 3 miles below the surface.

The Hornet played a role in several key events in the war – including the Doolittle Raid on Japan and the Battle of Midway. Researchers have located it 3 miles below the surface.

Great work that Paul Allen's team is doing. Fantastic bringing back the memories of these famous ships and the crew that served on them.

CBS News has a good article and video.
https://www.cbsnews.com/news/uss-hornet-wreckage-world-war-two-warship-discovered/

Reading Hornet War Damage Report (lost in battle) I was wonder who was in charge of the damage control of the machinery plant, CHENG of 1st LT? AFAIU, they didn't pay an attention to the broken condenser of one of the aft turbines that's why that room was slowly flooded. How First LT could find it out being outside the room?
H

Max, how about some ship photos of RFN warships? Sharing is caring.

They all are quite smoky always

Even the nuclear ones:
Peter The Great heating its boilers while both reactors are still cold
Same ship in flying quarter: Kamov's mincer
Note huge cloud of waterspray - always a sign of co-axial bumble-bee of Kamov origin
To me this cruiser design is the most beautiful the Soviets built.

And absolutely useless, by coincidence. All VLSs - an outcome of estimation of damages the Rockeye cluster bomblets can bring to a massive launchers of old designs, just like this one
BTW, side (pennant) number is a trick. There is no permanent side number assigned to a capital surface ship in Russian Navy. This number 099 means this is the ship of the 1st rank (O-6 or even O-7 CO), North Fleet, at the moment in the North Fleet operating zone, and nothing more. It may be changed to a 083 or even 105 overnight. No link to a definite ship.
Last edited: Feb 13, 2019

These early Krestas were steam-driven but the skills of the black gangs back then were much better. Namely this design, in opinion of majority of naval architects in Russia, has been the most cost-effective of them all.
Ok, that's all I can boast here, nothing more. After all, USN ships are more pleasant in appearance

View attachment 21063
These early Krestas were steam-driven but the skills of the black gangs back then were much better. Namely this design, in opinion of majority of naval architects in Russia, has been the most cost-effective of them all.
Ok, that's all I can boast here, nothing more. After all, USN ships are more pleasant in appearance

I'd hate to be the guy who had to reload that quad-missile launcher seen under the bridge...especially in combat!

It's called KT-100, this four-shooter. Pacific Fleet guys have reloaded it at sea from AKA-type transport. Some big-stars-on-shoulders idiot in Moscow Chief Naval Staff HQ stated that there should be a SOP for this shitty job. The word "fucking dumbass" was the least insulting comment from the ASW DHs of the DDs, and given the fact that many XOs and COs had same DH tour under their belts, eventually an idea had been graved there. Once again it surfaced on Baltic Fleet during my time, and we reloaded the flat version of such launcher, KT-106, on two Krivaks. Three of four missiles on my ship (85RU, so-called combined ASW/ASuW missile) after such reloading were out of commission, so we dropped the idea out too. Common sense, all in all, always wins, but sometimes it takes time

Well, the last one just to cover finally this funny question about the reloading of that fucking behemoth launchers.
The only surface ship of Soviet Navy which have ever had a "live fire solutions" with A/S missiles upon USN aircraft carrier was RKR Grozny, leadship of Kynda class, at 1973 during Yom Kippur War, operating against USS CV-62 Independence in the Med. Actually a destroyers, these four ships became cruisers by personal Khrushchev's decision in 1962 just to add weight and make everybody afraid (guess who

and had quite inpressive dimensions:

But eight more were stored ready for reloading but unfueled:

But filling them with fuel should have been done after reloading in the launchers, a very dangerous process which crew hated even more than they hated the Commie Deputy CO of the ship (a fucking bastard usually, equal to XO in rights but just no more than 10% of XO's responsibility). Additionally, it was almost impossible in a heavy seas. Interestingly - the loading of the missiles in the base had to be done through muzzle of the launcher rather that through a lock

Eventually, all sober considerations have led the thinking missile-job people of the Soviet Navy that the reloading of those four-shooters of any kind at sea is a silly wasting of time and resources with no satisfactory outcomes, and the best way to arrange it is to forget about it. So we did

pilot
Super Moderator
Mine Countermeasures Ship (MCM-1) USS Avenger. With a wooden hull reinforced by fiberglass, it has a low magnetic signature. Lead ship of a class of 14, 11 are still in service. It was planned to be followed by the LCS, not sure how that is going to work out.

Avenger during her initial shock test in 1987. An explosive device was placed beside the ship and detonated in order to simulate a mine explosion. She only suffered very minor surface hull damage to the hull coating during the test

Avenger operates off the coast of Hawaii during exercise Rim of the Pacific (RIMPAC) 2004.

pilot
Super Moderator
Some nice photos of the Missouri and other ships.

Surrender of Japan, 2 September 1945. Navy carrier planes fly in formation over the U.S. and British fleets in Tokyo Bay during surrender ceremonies. Missouri(BB-63), where the ceremonies took place, is at left. Detroit (CL-8) is in the right distance. Aircraft include TBM, F6F, SB2C and F4U types.

Navy carrier aircraft from Task Force 38 fly in formation over Missouri (BB-63), in center, and other U.S. and British naval vessels in Tokyo Bay, during the surrender ceremonies in the morning of 2 September 1945.

Harbor at Inchon: The time is 15 September 1950. The place Inchon, in the Republic of Korea. The largest amphibious landing since the end of World War II is underway.

Good article about Navy Day 1945 in NYC from the WSJ.

Seventy years ago, on Oct. 27, 1945, New York City was the site of the most spectacular homefront display of American military might the nation had ever seen. Navy Day was in effect a monumental victory lap, coming seven weeks after the signing of the Japanese surrender in Tokyo Bay aboard the USS Missouri.

Now the “Big Mo” and other stars and supporting players from the Pacific Fleet had come home. Along a six-mile stretch of the Hudson River, 47 warships gathered—battleships, aircraft carriers, cruisers, destroyers, submarines and submarine chasers.


President Truman was there. So was I. About 3.5 million people crowded along Manhattan’s West Side, with another 1.5 million viewing from New Jersey, according to press reports. Joining the USS Missouri, with its 16-inch turret guns bristling from its 56,000-ton frame, were the USS New York (an older battle wagon) and the USS Enterprise, the only aircraft carrier that had been active from Pearl Harbor to V-J Day.

"On Navy Day in 1945, a seven-mile line of U.S. Navy warships anchored in the Hudson River and some 1,200 Navy planes flew overhead in commemoration of the event."
Tugboats and U.S. Navy warships pictured in the Hudson River with the New York City skyline in the background on the occasion of Navy Day on 27 October 1945. Visible in the foreground are the anchored heavy cruisers Augusta (CA-31), Helena (CA-75), and Macon (CA-132); carriers Midway (CVB-41) and Enterprise (CV-6); and battleships Missouri (BB-63) and New York (BB-34).