Is it one your still proud of? (meaning somewhat sober when needled)

Is it one your still proud of? (meaning somewhat sober when needled)
Click to expand...

Stopped drinking months before I got it. It is one of the two I've wanted for years. So.... still happy! Getting the other one in a few days.

Should've told my friends to read the regs before I passed out in Tijuana... 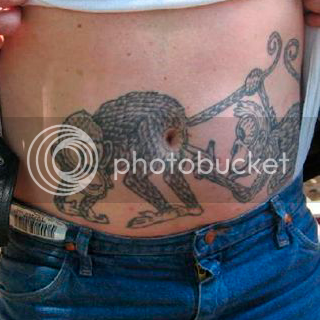 Right you are. We know whereof we speak, they don't.

When you're standing in the rain, looking through the glass, wishing YOU could fly those big ugly people/cargo haulers and the alternative is a job with no flight time.... you'll do ANYTHING to get the job. When it is between you and ten thousand other applicants for that job, do you want to piss off the airline office hack interviewer with your tatoo?

Mr Treetop just hasn't reached the end of his commitment. Just like most of us, he figures on a 20 year plus tour. Wait till they give you crappy orders (Don't worry about it, take these orders and we'll take care of you after....) and your kids no longer recognize you, the crappy civilian world doesn't seem so bad. When you consider getting out and the thought of getting a civilian management type job starts to choke in your throat - well, then you'll start lusting after a nice civilian flying job. Make no mistake, I never would have left the Navy if I'd had my way. But be prepared, the civilian world can be even more intolerant of personal decoration than the military.

And, when those tatoos are peeking out from under your shirt, maybe just because the Navy puts up with that crap, you'll consider getting them lased off so you can take nice flying job earning more money than you can imagine. Oh, and still fly in the reserves if you want.

pilot
nothing peaks out from under my shirt

A7Dave said:
you can take nice flying job earning more money than you can imagine.
Click to expand...

HEY!!! You guys who are former E-men ... ROCK ON ... I've ALWAYS 'admired' tats on your arms & dragons on your Bluejacket sleeves while walkin' down the streets of Wanchai , or Taipei, Kaohsiung, or Singapore, .... wherever. It's part of 'where you came from' ... so NO PROBLEM.

But: for you guys today who are NOT former E-men ...

It's weak. It's a 'desperate', semi-rebellious attempt on YOUR part to be 'one of the guys'. The airlines KNOW that -- and they don't want 'rebels'. Period. And I don't really CARE who tries to rebut this ... like I said; if it's a 'good thing' ... let's take the kids to the 'tat parlor' to watch Daddy/Mommy get branded for ... LIFE.

Experience talks ... bullshit (and what you 'wish' was reality) walks.

I don't doubt you're experienced enough to tell us how it is. But just because it's true doesn't make it right. Either way, if an airline won't hire me because of a tattoo... not much I can do about it now. Just because the "good ol boys club" decided that tattoos make you a trashy, immoral person, that means they won't hire tatted guys and gals? Ridiculous. I think merit and skill should be the prime focus, not what someone has on their body (and I'm talking about places that will be hidden by that cute little white shirt with the epaulets!).

The truth of the matter is: people will ALWAYS size other people up based on personal appearance. It's human nature. You just have to accept it. I get treated VASTLY different depending on if I am in uniform or civvies on base. But I look like I'm 18.

So in summary... don't want to hire me because of a tattoo that is completely covered up by my professional attire? Fine. No problem. Thanks anyway, and go ahead and F*ck yourself while I see myself out.

(not directed at you A4s... just the hypothetical future discriminatory interviewer)

Treetop Flyer said:
nothing peaks out from under my shirt
Click to expand...

phrogdriver said:
To quote Mr. Han Solo,"More than I can imagine, eh? I can imagine quite a bit."
Click to expand...

Well, we can accommodate that. And the good part is these days, you can do your twenty and still get in twenty with an airline.
B

Some info for you OCS applicants. When I put my package together I was required to take a picture of my tattoo up close and also in Navy issued PT gear from all angles. A waiver was required for it. Not sure if a waiver hurts your package but it definitely isn't helping it. Thankfully, it's a moto tat and not something extremely dumb.

Don't get anything that will show in uniform. Even in enlisted ranks you're looked at negatively if you have them on your forearms. My tattoo peaks out from under some of my T-shirts and Polo shirts and I often get random attention, some wanted (girls) some not (People wondering why I have a half naked Hula girl on my arm).

Point of the post: The board wants to see it when you apply. So you can't hide it no matter how hard you try.

pilot
one of the biggest reasons I decided never to get tattoos was seeing old WWII and Viet Nam vets with unrecognizable blobs of blurry ink on old skin. nature will disfigure me enough without me having to help. besides, i never could decide on something cool enough to wear forever.
K

HueyHornet75 said:
besides, i never could decide on something cool enough to wear forever.
Click to expand...

One thing to realize in that regard is that they weren't nearly as good at tattooing back in the day... Modern tattoos done by professionals will probably blur somewhat, but they will still look better than those of WWII vets. Food for thought.

Your second point is more valid, you definitely want to make sure it's something you're going to want to wear forever (wings of gold, for instance...).

How about brands on forearms? Will that stop me from getting a commission?

and since we're on the topic I'd appreciate other info:

saw a guy recently with Airforce wings on a blk/gld navy suit??

what is he? jet/helo?Navy or AF? Anyway.. I heard all fighter/bomber folks are all at least 6'2 or so because of the high speeds or something ?? Is that true?

BAGrad82 said:
How about brands on forearms? Will that stop me from getting a commission?

and since we're on the topic I'd appreciate other info:

saw a guy recently with Airforce wings on a blk/gld navy suit??

what is he? jet/helo?Navy or AF? Anyway.. I heard all fighter/bomber folks are all at least 6'2 or so because of the high speeds or something ?? Is that true?

Timmy,
Great questions. Welcome to the site. Please take some time to use the SEARCH function to answer your questions.