pilot
Super Moderator
If anyone is interested in geopolitics, I found this book intriguing and impossible to put down. The author is Peter Zeihan who is not some blowhard from Fox or MSNBC but rather a PhD.

Here are some links to reviews and also his website which has teaser videos on various subjects.

None
Super Moderator
Contributor
I read the Washington Post op-ed when it came out and it is certainly a fascinating perspective and I don't think the optimism is misplaced. I'll have to see if I have the time for the book, thanks for recommendation.

pilot
Super Moderator
As Brett said, "Lawrence in Arabia" is very good, but very heavy, read. Taking a break and going through "The Next 100 Years" by George Friedman. Like Zeihan, Friedman was part (actually the head) of STRATFOR. More than halfway through - good read. 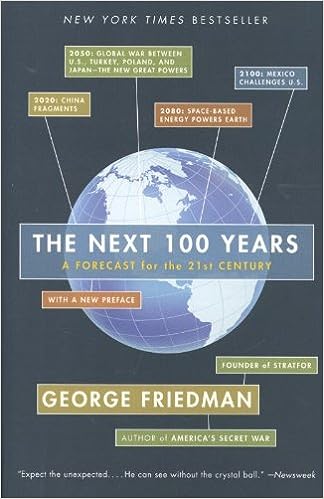 Renegade One said:
I'm still waiting for the f#cking jet cars I was promised 60 years ago…

Funny thing is, he mentions The Jetsons (as a family, not George or Elroy specifically, much less Astro...) at the end of the book. In case anyone is wondering, it does not turn out well for the US at the end.

Randy Daytona said:
In case anyone is wondering, it does not turn out well for the US at the end.
Click to expand...

To understand her foreign policy, it is important to understand the evolution of American strategy since the fall of the Soviet Union. Clinton is a creature of the beliefs, values and illusions that dominated American policy from 1991 until 2008. By understanding that world, we can understand Clinton’s core beliefs and then consider the extent to which they have evolved. Clinton represents the American and global consensus that emerged after the Cold War.

As an historian it is interesting to note the frightening similarities between the mid-to-late-1930's and today. The you had a supposedly defeated yet resurgent Germany testing weapons and tactics in the Spanish Civil War (while the US played the politics of disengagement) and today you have a wildly discounted Iran testing anti-shipping missile technology against US ships in the Gulf (while the US plays the politics of disengagement). Then you had Japan flexing her muscles in what they called the "Greater East Asia Co-Prosperity Sphere," today you have Australia declining to patrol the South China Sea with the USN because they see the US as deliberately taking a back seat while China is flexing their considerable muscle in the region.

Clinton's post-Cold War, Fukuyama based "End of History" ideology will be a detriment to her if she gains the Oval Office.
When it comes to Trump...there is no good measure to imagine what he might do.