Never has so much been owed, by so many, to so few

pilot
The Battle of Britain, often described as a turning point in the War. Paul Farnes was born in June 1918 in Hampshire, England WWI was still to be won.
Twenty years later he was in training with the RAFVR (Voluntary Reserve) and in September 1939 joined RAF 501 Squadron flying a Hawker Hurricane. He left the RAF a Wing Commander in 1958.
At the outbreak of war Farnes was due to be sent to Norway with his squadron but when the Germans over-ran Belgium and invaded France in May 1940 the 501’s sixteen Hurricanes were diverted to Bétheniville near Rheims.
Two days later, on May 12th Farnes opened his account downing a Heinkel 111 bomber and sharing the honours in the destruction of two other aircraft. 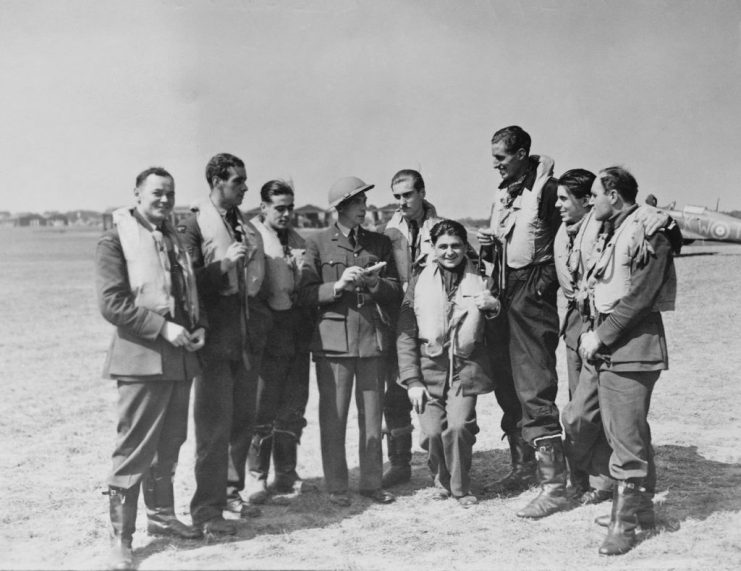 An Intelligence Officer (wearing helmet, centre) listens to the reports of fighter pilots of No 501 (County of Gloucester) Squadron, Royal Auxiliary Air Force, after a sortie during the Battle of Britain, at RAF Hawkinge, near Folkstone, Kent, 15th August 1940. The pilots are (left to right): Stefan Witorzenc, Hugh Adams, John Gibson, Paul Farnes (1918 – 2020), Antoni Gowacki, Bob Dafforn, Kenneth Lee and George Stoney. Sgt Antoni Głowacki is also notable for shooting down five German aircraft on 24th August 1940 during the Battle of Britain, becoming one of only four pilots who gained “ace-in-a-day” status during that battle. (Photo by Central Press/Hulton Archive/Getty Images)
As the German Army advanced and the Allied Forces were beaten back 501 Squadron scrambled for home.
Farnes and two comrades managed to get aboard a boat in St Malo bound for the Channel Islands where they were reunited with pilots who had escaped with their Hurricanes. They made their way back to Croydon Airfield where the 501 regrouped.
The Battle of Britain began soon after and in mid-July Farnes found himself back in action with 501 Squadron out of Gravesend in Kent. 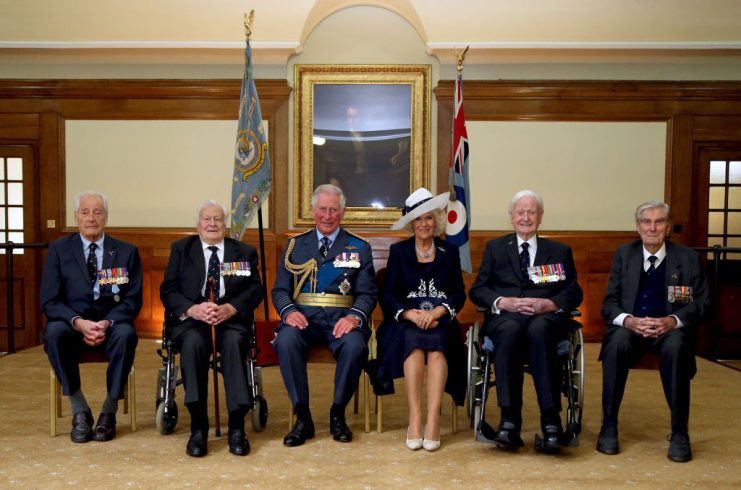 LONDON, ENGLAND – SEPTEMBER 17: Prince Charles, Prince of Wales and Camilla, Duchess of Cornwall with Battle of Britain veterans (L-R) Wing Commander Tim Elkington, Squadron Leader Geoffrey Wellum, Wing Commander Tom Neil and Wing Commander Paul Farnes during a reception following a service marking the 77th anniversary of the Battle of Britain at Westminster Abbey on September 17, 2017 in London, England. GETTY.
On August 12th, 1940 his first confirmed kill was a Junkers 87 Stuka dive bomber on the South Kent coast.
Three days later he shot down another two Stukas, a Dornier bomber three days after that and later a Messerschmidt Bf 109.
Through September the battle intensified and Farnes, with his squadron, faced the enemy regularly. On September 30th a problem developed with the Hurricane’s canopy, so he was forced to return to base. 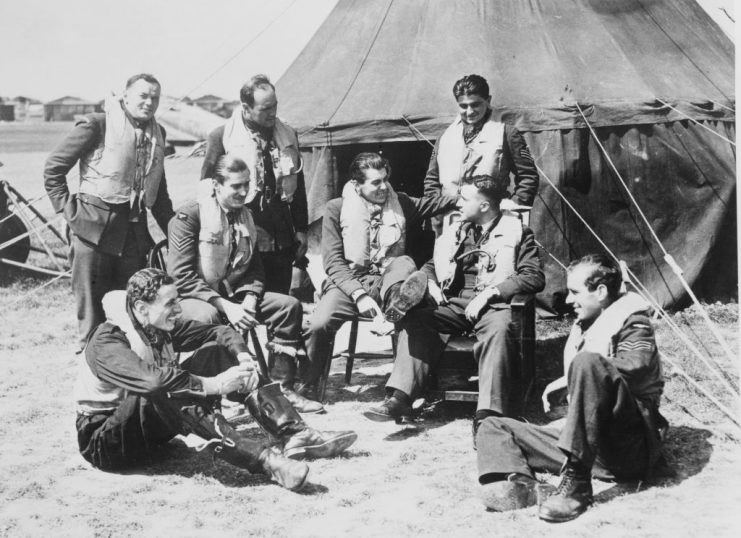 Left to right: Fighter pilots Stefan Witorzenc, George Stoney, Antoni Głowacki and sitting Bob Dafforn, Paul Farnes (1918 – 2020), Kenneth “Hawkeye” Lee, John Gibson and Hugh Adams of No 501 (County of Gloucester) Squadron Royal Auxiliary Air Force rest between sorties and listen to an account given by Gibson who has just bailed out of his aircraft, having been shot down by an enemy aircraft on 15th August 1940 at RAF Hawkinge, near Folkstone, Kent, England. Sgt Antoni Głowacki is also notable for shooting down five German aircraft on 24th August 1940 during the Battle of Britain, becoming one of only four pilots who gained “ace-in-a-day” status during that battle. (Photo by Central Press/Hulton Archive/Getty Images)
Flying near Gatwick, Sussex, the future site of London’s second International Airport, he encountered anti-aircraft fire being directed at a Junkers 88 bomber.
Farnes went on the attack and the enemy aircraft fell to earth close to the airfield. When he landed Farnes went to meet the surviving German pilot who was disinclined to shake hands.
501 Squadron stayed on the front line for a long time, longer than most, but were estimated to have destroyed more than 150 enemy aircraft at the Battle of Britain.
Farnes’ tally was six confirmed and as a result he was awarded the Distinguished Flying Medal and commissioned. His commanding officer wrote, ‘He has shown skill, calmness and reliability in combat.’
Following the Battle, he was deployed to Cheshire to pass on his knowledge and experience and train fighter pilots.
He was later sent to train pilots in Aden and then in February 1942 he joined 229 Squadron as a Flight Commander.

In April he was involved in very intense fighting and the squadron’s commanding officer was wounded which meant that Farnes had to step up and take command.
With typical modesty he later said of the promotion that, ‘As there appeared to be no one else available, I was made OC 229 Squadron.’
In July he was posted to Iraq and was promoted to Squadron Leader in 1944 after which he returned to the UK to command of 124 Squadron.
He remained with the RAF until 1958, training fighter pilots and attaining the rank of Wing Commander.
Since the end of the War and his retirement Farnes became an active supporter of the Battle of Britain Memorial Trust and could be seen at the annual reunions at Capel-le-Ferne until 2019.

He was the only Battle veteran still well enough to attend the event at the time.
Wing Commander Paul Farnes DFM died at his home in West Sussex, England on January 28th, 2020, the last remaining Ace fighter pilot from the Battle of Britain. He leaves behind a son and a daughter.
US Man Exposed as Nazi Commander Dies at Age 100
Two men, both survivors of the Battle of Britain remain, Flight Lieutenant William Clark and Flying Officer John Hemmingway. 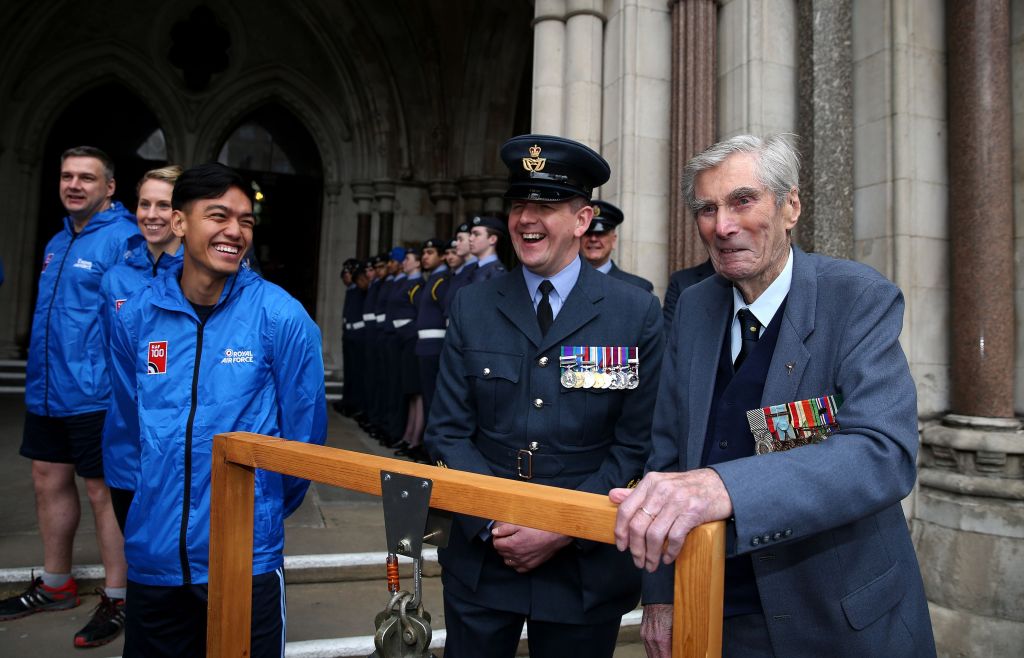 The Battle of Britain, often described as a turning point in the War. Paul Farnes was born in June 1918 in Hampshire, England WWI was still to be won.

pilot
The Battle of Britain is a really good study in resources and military campaigns.

The Spitfires cost more time and money to build and especially to repair than the Hurricanes did. Each of them brought eight guns to bear on enemy aircraft. Think how you would have allocated your resources between these two types? (And British fighter production went way up during this time.)

The British radar chains are thoroughly documented- the best way to think of that system was as an integrated air defense system running ground controlled intercepts and alerting AAA batteries. It saved them a ton of resources by needing fewer patrols and fewer wasted flight hours (saved fuel, maintenance on the airplanes, and pilot fatigue). It also gave them a command and control edge by bringing more guns to bear than they otherwise would have been able to do without having ground radar in their air defense network.

The German Messerschmitts were operating near the limit of their fuel range. (The early Spitfires had atrociously low endurance- but that's not necessarily a huge problem for a point defense interceptor.) Their fighter escort-bomber coordination was hurt by poor doctrine. Then their leadership made the famous mistake (mistake in hindsight) of taking the bombers away from targeting the British airfields and focusing on London.

And last but not least there was the home field advantage for British crews who survived getting shot down and could get back into the fight.

None
Contributor
Great read . . . . thanks for sharing !!

None
Contributor
Just finished "The Splendid and the Vile." Fantastic read . . . .

"The book, which chronicles the period from May 1940 to May 1941, when Churchill supposedly saved “England,” is firmly rooted in that green and pleasant land, conveniently ignoring those dark satanic mills. While war rages, his protagonists attend debutante balls at posh hotels and shoot partridges in the “cool green of the countryside.” “The girls rode bicycles and horses, played tennis, swam, went to the movies, and danced with airmen at nearby RAF bases, occasionally bringing them back for . . . ‘snogging’ sessions in the hayloft.” This was war, but not as most Britons actually knew it."