pilot
Contributor
HJ...you got them mixed up.

010914-N-0000X-002 Pascagoula, Miss. (Sept. 14, 2001) – The Arleigh Burke-class destroyer USS Cole (DDG 67) is back in the water. Cole was relaunched at Northrop Grumman Ship Systems Ingalls Operations in Pascagoula, Miss., after repairs on her hull were completed. The ship was transported to Pascagoula following the October 12, 2000 terrorist attack in Yemen. U.S. Navy Photo (RELEASED)

None
Super Moderator
Contributor
The Perfect time to land?

Remember Dev (et al) , the MC's that shoot the images and write the captions aren't aviators....looks like the "Beartrap" is deployed to catch the "Wolfpack"...

heyjoe said:
Remember Dev (et al) , the MC's that shoot the images and write the captions aren't aviators....looks like the "Beartrap" is deployed to catch the "Wolfpack"...

Actually, in this case, it's not far from the truth. I'm just trying to figure out

None
Super Moderator
Contributor
Arleigh Burkes and their relationship with helos

Mumbles said:
HJ...you got them mixed up.
Click to expand...

That was a placeholder you saw. Start from beginning....(post #1)

Teaching pigs to dance, one pig at a time.

Gatordev said:
Actually, in this case, it's not far from the truth. I'm just trying to figure out

020725-N-6492H-530 At sea with USS The Sullivans (DDG 68) Jul. 25, 2002 -- The guided missile destroyer USS The Sullivans, part of the Kennedy battlegroup, transits the Mediterranean Sea. The Sullivans is named for five brothers who lost their lives in World War II during the Battle of the Solomon Islands. U.S. Navy photo by Photographer’s Mate 1st Class Jim Hampshire. (RELEASED)

090213-N-4774B-098 PACIFIC OCEAN (Feb. 13, 2009) A member of a visit, board, search and seizure team stands lookout watch by a MK-45 5-inch/54-caliber gun aboard the guided-missile destroyer USS The Sullivans (DDG 68) as the guided-missile cruiser USS Lake Champlain (CG 57) pulls alongside during a training exercise. The Sullivans and Lake Champlain are on a scheduled deployment to the western Pacific Ocean supporting global maritime security. (U.S. Navy photo by Mass Communication Specialist 2nd Class Daniel Barker/Released)

051203-N-0295M-013 Philadelphia, Pa. (Dec. 3, 2005) - A Sailor assigned to the guided missile destroyer USS The Sullivans (DDG 68), waves his ship's flag in front of the U.S. Naval Academy Midshipmen near the end of the 106th Army vs. Navy Football game, held for the third consecutive year at Lincoln Financial Field. The Sullivans was one of two Navy destroyers that visited Philadelphia for the game and Philadelphia Navy Week. The Navy defeated the Black Knights of Army 42-23. The Mids have now won the past four Army-Navy battles bringing the all-time series to 50-49-7. The Navy (7-4) has accepted an invitation to play in the Poinsettia Bowl in San Diego on Dec. 22. U.S. Navy photo by Photographer's Mate 2nd Class Daniel J. McLain (RELEASED)

051201-N-4936C-002 Philadelphia, Pa. (Dec. 1, 2005) – The guided missile destroyer USS The Sullivans (DDG 68) prepares to moor at Penn’s Landing in Philadelphia. The Sullivan’s arrival is part of Philadelphia Navy Week, sponsored by the Navy Office of Community Outreach. Twenty such weeks are planned this year in cities throughout the U.S., arranged by the Navy Office of Community Outreach (NAVCO). NAVCO is a new unit tasked with enhancing the Navy's brand image in areas with limited exposure to the Navy. U.S. Navy photo by Journalist 3rd Class David P. Coleman (RELEASED)

Steve Wilkins said:
I've never heard a Flight IIA referred to as a Flight III, however a Flight IIA is the third in the series of designs. Flight I, Flight II, and Flight IIA
Click to expand...

Yeah, it was my tongue and cheek way of saying the PAOs have failed again.

Gatordev said:
Yeah, it was my tongue and cheek way of saying the PAOs have failed again.
Click to expand...

It happens. If they'd just sit in on the Recce training that any "spy" out fresh in the fleet can provide, they'd do a lot better. It's very troubling because these is are "official" releases and are posted primarily for use by the media so errors can go viral in a heartbeat. It's just not that hard to get it right.

pilot
Contributor
I was on the Mustin for summer cruise. Their "helo det" consisted of 6 treadmills and 4 wuba chariots.

heyjoe said:
It's just not that hard to get it right.
Click to expand...

You would think the attention-to-detail that they were taught during Navy basic training would help them get it right. 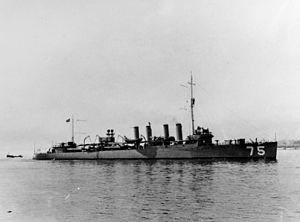